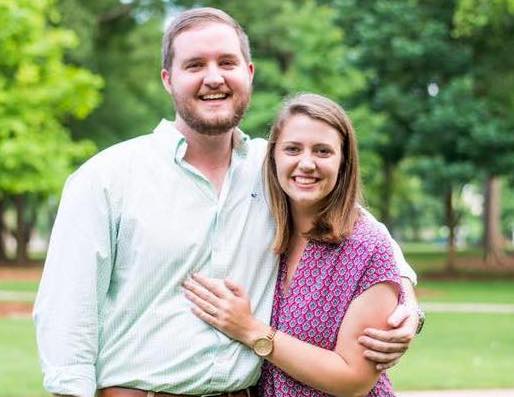 Before worship on Sunday evenings, Pastor Shuler Sitsch hosts “cottage meetings” in the afternoon. He gathers with his new parishioners, the Cy-Fair United Methodists – former members of area congregations that have disaffiliated. And while they might not yet have an official name – or a permanent building – they already have a spirit of community and feel like a new United Methodist family.

Sitsch first dedicates time to grieving together. “Everybody’s discernment process was different,” Sitsch said. “It’s important for me to understand where everyone is coming from in this space.”

Then, he asks attendees at the cottage meeting to reminisce. He wants to know what members loved about their previous church homes and what makes them passionate and committed United Methodists. “I’m taking notes,” the pastor said. “I want to know where the common threads are.”

Finally, Sitsch invites the group to share their vision of what Cy-Fair United Methodist Church could become. “We just dream together,” he said.

Sitsch has followed this format through December and continues into January. His goal is to create a guiding framework as the community moves forward – and start developing a church identity.

He also spent last month having lunches with parishioners. He opened his schedule up on SignUp.com. Anyone who wanted to sit down at noon during the week was invited to reserve a time slot.

Sitsch announced the option on a Sunday. “Within 24 hours, all of December was booked,” he said. “We did it in January again. We’ll do it as long as we need to.”

Connecting with members of Cy-Fair United Methodists is his top priority. He also is providing space for them to get to know him.

Sitsch shares their story in a way. He served as associate pastor at Lakewood United Methodist Church since 2018. The congregation disaffiliated in October, but he decided to remain a United Methodist pastor.

The way Sitsch ended up at the helm of this new congregation feels divinely inspired. During a meet-the-pastor night in November, he compared making the announcement of his appointment to a child waking up on Christmas morning.

“I have been chomping at the bit for this day to get here,” Sitsch told the congregation. “I’m excited to be able to partner alongside what God is doing in this space. And this should be no surprise to you, but God has already done a lot.”

Church planting had not previously been at the forefront of his mind. Still, there was a tug in that direction.

At NCLI, however, the guidance provided by leader Jim Griffith, founder of Griffith Coaching, provided inspiration. The experience instilled him with new confidence.

Still, church planting seemed far off into his distant future. When Rev. Morris Matthis, Director of the Center for Leadership Formation, asked about the experience, Sitsch replied, “I’m still discerning. I’m interested in planting, but I don’t know when.”

Only a month later, however, an irresistible opportunity would prevent itself. Sitsch heard about the Cy-Fair United Methodists, a group of individuals committed to the denomination, gathering at the Cypress Alamo.

“I knew they had started meeting, and I watched the first worship online,” he recalled. “Honestly, I was floored. They put together everything so well in the first couple of days.”

Sitsch credited Dr. Godfrey Hubert, the Texas Annual Conference’s disaster relief coordinator, with having the strength and drive for organizing the group. “He reached out to people and got everyone together,” Sitsch said. “He did the groundwork.”

In his disaster relief work, Hubert is accustomed to moving quickly and coordinating extensive efforts. He also knows the area, since he served as Senior Pastor of Foundry United Methodist Church previoulsy and started two nonprofits: Cy-Hope, a ministry dedicated to helping underserved children, and Hope Disaster Recovery, which helps vulnerable communities recover from disaster.

“He knows what it looks like to start something new,” Sitsch said.

Hubert felt a familiar sense of urgency during the end of 2022, not unlike after a natural disaster. “There were people without shepherds,” he said. “I saw how many people were distraught, feeling abandoned by their churches and hurting without pastoral care.”

Hubert explained, “When people are stranded, you stop and render aid.” And he was seeing area residents spiritually lost.

“I wanted to have an opportunity for United Methodists without a church to come together and form something new,” Hubert said.

He planned the inaugural gathering of the Cy-Fair United Methodists on Nov. 6 at the Cypress Alamo, posting to Facebook the words of Isaiah 43:18, “Forget what happened – it is nothing compared to what I am going to do.”

Hubert reached out to members of Lakewood, the Foundry, Cypress and John Wesley UMC who might be interested in attending a new gathering. “I didn’t set out to start a church but to bring people together,” Hubert explained. “On purpose, we didn’t call it a church. We just called it a Cy-Fair United Methodist gathering.”

The first Sunday service drew 162 guests. The next week, there were 172. By the third week, 182 gathered, and Hubert preached, “This is why I’m thankful for the UMC.”

Hubert got a call from Matthis, “Godfrey, you lit a fire. We’ve got to do something.”

Matthis said that he had just the pastor in mind to lead the new group. He invited Sitsch and his wife Sara to lunch to discuss the move.

Sitsch said his wife’s guidance usually is to follow where he feels led by the Holy Spirit. This time, however, was different. Sara heard the calling loud and clear.

“When we got back in the car, she was like, ‘This is something we need to do,’” Sitsch recalled. “I called Morris back and said, ‘We’re ready to go.’’

At first, the plan was to start the appointment on Jan. 1. “But we started talking, and decided, ‘Let’s do it Dec. 1 and have Advent together,’” Sitsch recalled.

The appointment news came out Nov. 13, and Sitsch preached his first sermon on Dec. 3. Hubert said that Cy-Fair United Methodists is in the right hands, “I’m very impressed with Shuler.”

Hubert explained that this is not like a usual church plant. Instead, he considers it a reboot.

“I didn’t go to this effort to recreate the past,” he said. We have to think outside the box and reimagine what the church can be.”

He envisions Cy-Fair United Methodists becoming a place where all are welcomed and included – and the mission is to serve and make life better for the community, especially the most vulnerable.

Already, a children’s ministry has formed, and on Jan. 15, there will be a kickoff event for the student ministry. “A big focal point is how we will invest in our children and families,” Sitsch said. “We want children to have a meaningful experience.”

The Cy-Fair United Methodists have begun to outgrow the Cypress Alamo. Their Christmas Eve worship was held at the Tomball Events Center.

Sitsch said that the next steps will include getting chartered and eventually settling on a name. “It’s been really cool to create this from the ground up,” he said. “None of us have the opportunity to say, ‘We’ve always done it this way.’”

Cy-Fair United Methodists offers a refuge, Sitsch added. “We’re adopting a new identity,” he said. “We’re not made up of six or seven former churches. We are one together now.”

Sitsch continued, “We’re able to really lean into the concept that the church is not a building. Church is a group of people who live life together. The church is the people who show up. I’m seeing that in a way I never have before.”