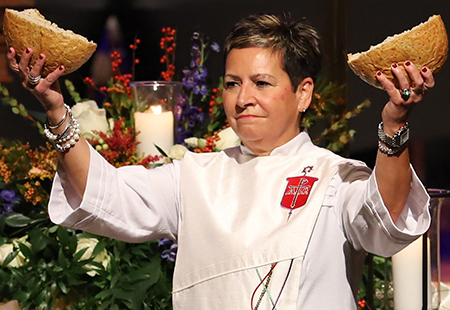 Bishop Cynthia Harvey was in the midst of moving into her new home in Houston, when her tenure as resident bishop of the Texas Annual Conference began on New Year’s Day. The process has become like meditation. “Unpacking a box is somewhat cathartic work,” she said. “It gives me time to think – what we need to do, how we bring some stability, some healing to a Conference that is hurting, to clergy that are exhausted.”

Harvey explained that pastors have endured a tumultuous few years – first with the COVID pandemic. “Then we got sucked into the vortex of disaffiliation and withdrawal,” she said.

Her appointment comes at a challenging moment – in the aftermath of the loss of nearly half of the Texas Annual Conference’s congregations. “You can’t just say, ‘Get over it and let’s move on,’” she said. “You have to acknowledge what’s occurred. Ignoring it isn’t going to help. Let’s address it and then figure out, even in this unprecedented time, what we have learned that we can leverage.”

That’s a question Harvey will explore with others during her upcoming listening sessions with Conference leaders. Empathy and excitement are driving objectives for these meetings – listening with empathy to what people have experienced and exploring with excitement a Spirit-prompted vision for the future.

Harvey then plans to apply that feedback to build infrastructure for care, healing and reclaiming our mission. “I don’t want us to lose focus on the mission,” she said. “We’ve got to refocus.”

These are hard times, not only in the UMC, but also in the world, Harvey explained. “We’re a reflection of what is happening in the world,” she said. “If you went down the street, they’re probably feeling some of the same kind of things.”

Still, Harvey finds hope in the individuals and organizations that rise to the challenges and face pressures head on. She calls those groups, which are driven to make a difference, “coalitions of the willing.”

In the Texas Annual Conference, Harvey said, coalitions of the willing can be found forming new faith communities.

In the past month, already five have formed, composed of committed United Methodists who want to continue serving their communities. “That’s the kind of movement that is so exciting to me,” Harvey said. “God is calling us.”

After graduating with a degree in journalism from the University of Texas in Austin, Harvey spent 12 years in the corporate world as a regional director of marketing for the Rouse Company, a shopping center developer with properties throughout the U.S. Harvey then earned her Master of Divinity at Southern Methodist University’s Perkins School of Theology in Dallas.

Harvey also served as Deputy General Secretary for the United Methodist Committee on Relief (UMCOR). She was elected as a bishop by the South Central Jurisdiction in 2012.

Harvey said Houston has changed since she last worked in the Texas Annual Conference administrative building – and she has as well. “I come back with 10 years episcopal experience, two years experience in a general agency, and a whole new appreciation for the United Methodist Connection,” she said.

She is also adamant about diversity and inclusion. “We all have a place at this table,” she said. “Having been a person who didn’t always have a place at the table, sometimes, I had to make my own. I don’t want people to have to do that.”

Making room and giving voice to people of all backgrounds is essential, Harvey said. One of her goals is to build cultural competency, to help foster understanding, mutual respect and support.

She acknowledges that there is a sense of loss and that there must be time to grieve. “We’ve got to give each other space for that. Everybody grieves at a different pace and in a different way,” she said.

Harvey wants clergy and the Conference leadership to know that their work and dedication is not going unnoticed. She said, “Our clergy and laity are God’s beloved, and I want to communicate that as consistently and clearly as possible.”

Harvey sees the Holy Spirit moving – and a Conference full of faithful followers of Jesus. She says, “We’ve never had this opportunity ever before. The canvas is pretty clean. What picture do we want to paint? It is certainly a picture of a future filled with sacred surprises through the Holy Spirit.”