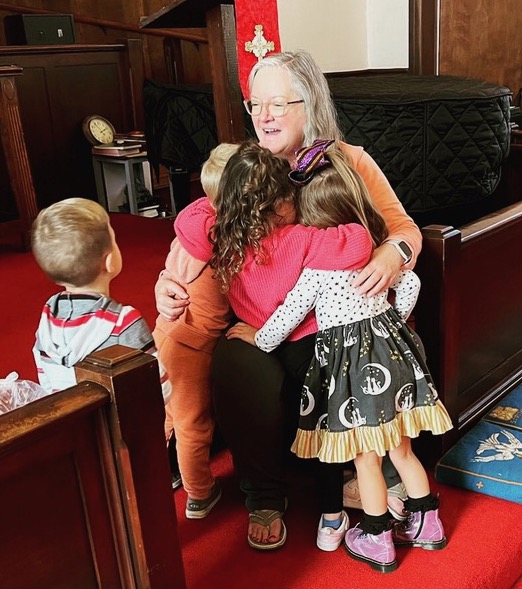 The campus at FUMC Grand Saline housed a preschool since the 1990s – until COVID shuttered the doors. Instead of being a blow, however, the closure turned out to be a blessing in disguise. The congregation found a way to reclaim the ministry – and better serve area families.

Church member Eva Carnes was among those who gathered to discuss the future of the day school. “We could not find a director,” she recalled. “Out of my mouth tumbled, ‘I’ll do it.’”

The words surprised her. After all, she had been working in the medical field for years – and her own children were grown.

Carnes went home and prayed. “Okay Lord, what are we going to do with this?”

Repairs to the building were needed, that much was clear, Carnes explained. Since the preschool had closed, the church had time to renovate. “But we had no money,” she said.

Donations started to pile in – some from members and others given anonymously. Sometimes, volunteers would arrive to find a needed item waiting outside.

Carnes made it her mission to find new staff, and then all went to work writing a curriculum. “In the meantime, we got a new pastor,” she said.

Pastor Susan Smith arrived at FUMC Grand Saline in July 2020. She brought years of experience in early childhood education to the table.

In fact, Smith’s mother ran a preschool out of her home. She literally grew up around education. Later, she became a high school math teacher, then director of a child care center overseas.

Smith returned to the university to earn a master’s degree in early childhood education and also worked as a math curriculum specialist. “God equipped me for this,” she said.

By the time Smith started her appointment, FUMC Grand Saline had decided not to reopen as a full-week preschool but instead as a Mother’s Day Out program, twice a week – Tuesday and Thursday, 8:30 a.m. to 2:30 p.m.

Carnes had quit her job to completely dedicate herself to the program – and committed to making it a ministry of the church, not just a school on the congregation’s campus.

“When it was a daycare, they didn’t pray,” Smith said. “Eva asked me, ‘Would you do chapel with them?’”

The pastor jumped at the opportunity. Chapel became part of the daily offering, as well as art and music.

“The way the kids’ program is now is just amazing,” Smith said. “There is discipleship going on; there is love and care.”

These days, the children start each morning with the affirmation: “I am a child of God.”

This school year, Carnes heard a new calling – to make the program free to parents. “We live in an area that is very impoverished,” she said. “It’s a super small, rural farming town.”

Carnes realized that families were struggling to pay for childcare. “They were stressed, and my heart was just hurting,” she said.

She approached the church’s committee with the idea to offer the program for free. “It’s time to go deeper,” she said. “He’s provided and provided to us. It’s time to step out in faith even further.”

The committee was on board – and fundraising began last August. By Jan. 1, 2023, enough was raised to provide Mother’s Day Out for free for one year.

Parents rejoiced to hear the news. “Some of the moms just started crying,” Carnes said. “It really meant a lot.”

In the meantime, a new pastor was appointed to serve FUMC Grand Saline; Kelly Krone started Jan. 1. “He has joyfully stepped into the role,” Carnes said.

Pastor Susan Smith, now at Fairfield UMC in Tyler, said the program is in the best of hands. She said, “Eva is just amazing.”

Many of the parents who use Mother’s Day Out are unchurched but want their children to experience a Christian education, Smith explained.

Carnes added that the ministry has also served the teachers, in addition to children and families. Regardless of how many become church members, they are all drawing closer to Christ.

“They’re not all going to show up to church on Sunday,” Carnes said. “But we’re definitely planting seeds.”