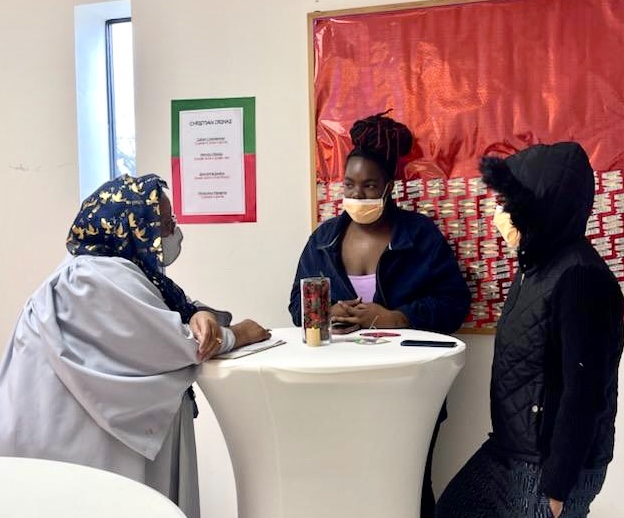 The first time Wendy Abel heard about Six Sigma – a process that makes use of statistics and data to analyze and reduce errors – was on a grant application. Abel serves as the Texas Methodist Foundation’s (TMF) director of grants ministry. In November 2021, she read an application from McKinney Memorial UMC in La Marque. The church proposed using Six Sigma to expand their church’s reach to young adults.

Abel began to research the program, and the more she read, the more it spoke to her. “It’s a problem-solving process that is used in manufacturing,” she said. “It’s based on five phrases –  define, measure, analyze, improve and control.”

In fact, the program was founded by Motorola – and later transferred to the office environment. Wheeler said that she has witnessed Six Sigma take hold in a number of industries. “But I haven’t seen much in the church – or anyone really even talking about it,” she said.

Both Wheeler and Abel have been interested in how data can be collected to better inform church success.

“My background is in outcomes and measurement,” Abel said. “I was wondering, how do we measure evangelism? What does it look like?”

She explained that the answer had to be different from increasing management, handing out Bibles, gifting Bibles or hosting revivals. “It has to be more than that,” she said. “So, we attached evangelism to social impact.”

That means factors like education, income and employment could be affected by a congregation’s outreach, as well as spiritual condition.

Churches can send out surveys to gauge the success of a ministry – or find a way to directly measure outcomes. For instance, if a congregation offers mentoring, student report cards could be a key metric.

“Count the work you are doing,” Abel said. “Then, you can see the impact your church has. You can see if there is an improvement – and you can make real decisions based on that information.”

Congregations can go deeper into their work once they have measured the data, she added. “That measurement helps you see what you are doing – and that helps you get more dollars, because you can prove that it is working,” she said.

Her own brainstorming about collecting data to benefit churches coincided with McKinney Memorial’s proposal of a specific process for measuring success. Abel felt like that was confirmation of a need.

“They have been more instrumental than they know in the direction TMF is heading,” she said. “It all happened at the same time.”

Carol Johnson serves as chair of finance and a grant writer at McKinney Memorial UMC. She retired from her role as quality manager at Dow Chemical and, while there, received the highest level of certification in Six Sigma.

Johnson said that the poor church attendance from young adults was weighing on her. “I got to thinking about it,” she said. “Why not use Six Sigma? It helps with just about any kind of problem.”

Johnson started to pray about it – and then spoke to her pastor, who gave the green light. “We’re to be good stewards and prayerful servants,” she said. “Some people might say that church is not a business. But in a sense, it is. It’s God’s business.”

In the corporate world, it’s all about the bottom line. “You’re trying to save dollars,” Johnson said. “In church, we’re trying to transform people.”

When she saw the TMF grant opportunity, she put together a proposal – to use Six Sigma to address the lack of young adults in the pews, calling the program “Go Fish.”

TMF approved the McKinney Memorial proposal to move to the second phase in January 2022. Then, the church hosted TMF for a virtual site visit in March.

Abel recalled learning at that time how the congregation transformed their fellowship hall into the “Little Town of Bethlehem” for Christmas. Instead of hosting a toy drive, McKinney Memorial created an experience for families.

While children enjoyed a Christmas party, parents were invited to a lounge. Church members used the opportunity to learn why young families were no longer coming to church.

“I found that really fascinating,” Abel said. “They were really trying to discover ways to get younger people to participate with the church and become involved.”

“We were all excited,” Johnson said. “It was something new, a different approach to solving a problem.”

A steering committee formed, including young adults and other church members. The pastor served as a sponsor. One of Johnson’s former colleagues joined as a co-facilitator to help implement the Six Sigma approach.

“There was a lot of prayer, a lot of talking and strategic planning,” Johnson said.

The first step was defining the problem – “Why are young adults leaving?” Then, the group had to measure the actual number of young families in the pews.

The committee discovered there were about 2 to 3 percent of young adult members. “That’s almost nothing; it’s extremely low,” Johnson said.

The group hypothesized why attendance dropped so dramatically. “We came up with about 100 possibilities,” Johnson said.

The possible explanations were grouped into four main categories: life changes, a problem specifically with the congregation or pastor, lack of connection to the ministry and religious, political or ethical differences.

Surveys were sent to young adults who were former church members. The steering committee also looked at trends from the firm Lifeway Research, which reinforced their own data. “We felt like we were on the right track,” Johnson said.

Eventually, a full picture emerged, and the committee brainstormed action items. “Now we have a list of what we can do,” Johnson said.

Already, the church has started a choir and a virtual small group for young adults called “Get Lit.” Other plans call for a symposium, career fair and mission project. “We’re moving right along,” Jonson said.

McKinney Memorial was one of 49 applications funded by the TMF in 2022. Abel explained that 140 applied, with 90 in the second tier of review.

This past grant cycle, there were 242 applications, with 98 moving to the next round. The deadline for their next step is Jan. 31.

Then in the spring, the TMF will announce the new grant recipients, and the whole process begins again in November.

“Between now and November, let’s chat and see what you’re interested in and how we can look at evangelism through a social impact lens,” Abel said. “Six Sigma might help you with that.”

Wheeler agreed. “It seems like people are getting on board with it, and I’m excited,” she said. “It’s a foolproof methodology for fixing problems. Why not give it a shot?”

Johnson said that congregations can benefit from applying Six Sigma’s process to their congregation. “It’s easy to do a survey, easy to go through an interview process,” she said. “And it’s easy to sit down and throw out ideas and ask what if.”

Taking the initiative to collect data to measure a ministry’s success is now key to receiving a grant, Abel explained. She said that McKinney Memorial’s Go Fish program is a good example of the type of program TMF hopes to support.

“How can we be more socially impactful? How do we look at the community and not just at increasing membership?” Abel asks.

“A lot of what we do is sitting down, meeting churches and organizations,” Abel said. “That is how we develop new relationships and find innovative ideas. We want to do more than just fund. We really want to be a partner, a collaborator.”

Churches with denied proposals are invited to webinars to improve their requests in the future. “We’re always here for assistance or to bounce off or vet ideas,” Abel said.

Wheeler explained that TMF seeks to strengthen the church to make disciples of Jesus Christ for the transformation of the world by galvanizing financial resources and courageous leadership. “At TMF, we want all boats to rise,” she added.