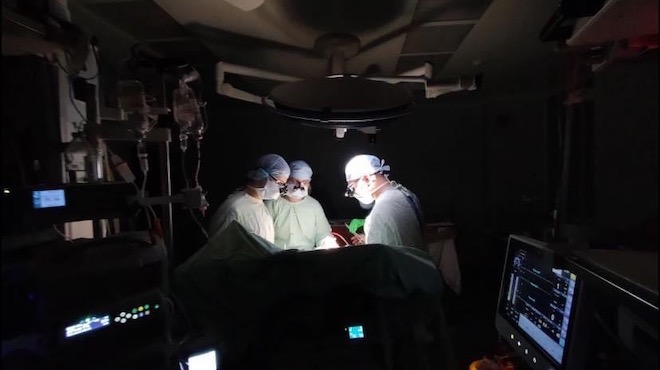 Making Christmas brighter for children hospitalized in Ukraine is one of the current top priorities at the Arlene Campbell Humanitarian Foundation. The nonprofit, located in North Zulch, Texas, is working with a toy store in Kyiv to provide gifts to two hospitals with pediatric patients – the Heart Institute of Kyiv and the Children’s Center for Cardiology and Cardiac Surgery. The nonprofit’s founder and president Lena Denman is a member of FUMC Madisonville in the Texas Annual Conference.

“Studies have shown that a gift can help boost a child’s morale and help with healing,” Denman said. “These children are fighting for their lives. How simple it can be to help one child going through a crisis now. It would really help with their recovery.”

Denman explained that a small donation of $10 to $20 covers the cost of a Christmas gift. Her hope is to raise enough donations to not only provide gifts for young patients but also to the children of hospital staff.

She explained that a number of doctors have been living in the facilities, where they are working around the clock. Denman wants to help their families enjoy Christmas – and help lift the children’s spirits at the hospitals.

“The need is incredible,” Denman said. “The doctors are so bombarded, and there have been consistent blackouts. They are without utilities a lot of the time.”

Still, the medical professionals are working around the clock, doing whatever they can with limited supplies. “I’m amazed at how steadfast they are,” Denman said. “These doctors are staying, and it’s pretty incredible. They want to help the people in their community. They don’t want to abandon them.”

She feels called to do whatever possible to help them continue their work. Hospitals give her lists of the supplies they need. The World Health Organization also sends her requests.

Denham then takes those lists, and with the limited budget of a small nonprofit, goes to work. She has to find suppliers and figure out shipping logistics.

The Arlene Campbell Humanitarian Foundation was delivering supplies to hospitals in Ukraine before Russia’s current invasion. Denman already had relationships with doctors and medical staff in the country, which enabled her to find out exactly what was needed.

Finding sources for funding was critical to meet the increased demand at hospitals as fighting escalated in the Ukraine. Three grants from the United Methodist Committee on Relief (UMCOR), part of United Methodist Global Ministries, have made all the difference.

A second grant of about $199,000 further supported the needs of hospitals, allowing a fourth shipment to be made to Ukraine on June 10. There were 23,000 pounds of medical supplies and equipment, valued at $290,000 delivered to the State Institution Ukrainian Health Ministry Heart Institute.

Finally, a third grant for $500,000 was received in September. With the UMCOR’s help, the Arlene Campbell Humanitarian Foundation delivered a total of seven shipments in 2022 – providing more than 128,000 pounds of medical supplies, valued at $2.8 million to more than 10,000 beneficiaries.

The most recent shipment arrived at the Heart Institute of Kyiv in October and contained endoscopic equipment, surgical tools and personal protection equipment. It weighed 21,700 pounds, valued at more than $1 million.

Later that month, grant funding from UMCOR and individual donors enabled the Foundation to donate 90 pairs of women’s boots and 80 pairs of men’s boots to a senior home in Chernivtsi, Ukraine. “The elderly people did not have adequate shoes for the winter,” Denman said. “We want to continue to help Ukrainians prepare for winter as blackouts persist.”

These shipments save lives. For example, one soldier, who was deployed to the Kharkiv region of Ukraine, was shot and needed immediate surgery.

Dr. Vitaly Demyanchuk, the deputy director of the State Institution Ukrainian Health Ministry Heart Institute, said that items needed for the operation, which were funded by the Arlene Campbell Humanitarian Foundation and purchased in Ukraine,  made it possible for the soldier to heal and return to the battlefield.

Another example came in November with the delivery of a medication critical for heart transplants – Simdax – to the Ukrainian Children’s Cardiac Center in Kyiv. Dr. Andrii Maxymento said that because of the needed heart transplant medication a 12-year old boy, who required his fourth heart surgery, is now home and healthy.

Heart complications are on the rise in Ukraine, a result from stress and inadequate nutrition. Denman worries that in the midst of winter, with a lack of heating and electricity in the Ukraine, medical needs will continue to increase.

“People are not able to get jobs, which makes getting basic necessities more difficult,” she said. “How can we get the supplies they need so they can have adequate medical care?”

Denman said that as the fighting continues, the demand for medical supplies is urgent. “The situation today is worse than in February or March,” she explained. “There is a massive crisis.”

More than 1,100 hospitals have been hit, Denman added. “That includes ambulances and warehouses where health supplies are stored,” she said. “The need is overwhelming. This humanitarian crisis is not getting better.”

Denman’s first trip to Ukraine was at age 16 in 2000. She traveled alongside Arlene Campbell, a woman who had a ministry to help immigrants from the former Soviet Union.

Denman’s father, a minister at a nondenominational church in California, introduced his daughter to the extraordinary woman, who shipped medical supplies to Ukraine and maintained connections with doctors to help meet their needs. She also coordinated deliveries of clothing and food.

Campbell began working with immigrants from the former Soviet Union as a teacher in 1985, joining with her sister Laverne Campbell in the effort. Her humanitarian aid work began in 1989 under an organization called Russian Relief. She then started the Former Soviet Union (FSU) Cultural Exchange program in June 1999 and sent containers of donations and medical supplies to numerous cities in Ukraine and Russia.

Denman’s first meeting with Campbell in 2000 was to assist with sorting medical supplies. A trip to Ukraine soon followed.

Denman toured hospitals and met doctors. She witnessed firsthand how highly-trained doctors were underpaid and did not have the supplies they needed. It would later become her own calling to help them.

Denman was inspired to earn an undergraduate degree in international studies and political science at California State University East Bay and her master’s degree in international/global studies at Texas State University San Marcos. Now a professor teaching government at Blinn College in Bryan, Denman is also pursuing a doctoral degree at Grand Canyon University in organizational leadership with an emphasis in higher education.

Not long after their trip together, Campbell passed away from diabetic complications in 2002. Denman followed up on the ministry after finishing her master’s program. Then, in 2016, she founded the Arlene Campbell Humanitarian Foundation.

She believes that there was divine intervention in her meeting of Campbell, the friendships she maintained with doctors and the connections she made along the way.

Denman now believes that carrying on the Foundation’s vision is her late father. “He really believed in this work,” she said. “I know that this is going to be my life-long mission.”

Denman stays glued to reports from the World Health Organization showing the growing need in Ukraine. “Emotionally I want to be there on a daily basis,” she said. “That’s the hardest part.”

She dreams of the Arlene Campbell Humanitarian Foundation expanding to offer more services in the future. In the meantime, the organization continues to efficiently respond to the demand for urgent delivery of medical supplies.

For instance, the nonprofit recently developed an agreement with the Chicago-based LeoDoc Foundation to provide Ukrainian refugees around the world with telemedicine from medical doctors or psychologists.

Currently, a shipment is in transit for the Arlene Campbell Humanitarian Foundation, delivering 96 palettes of protein shakes to Ukraine, funded by the nonprofit Baylor Scott & White’s Faith in Action. Denman said that there are more than one million servings, which will help Ukrainians get quick protein during the long winter ahead.

More funding is needed for continued shipments of supplies. Monthly donors make the most impact for continuing the Foundation’s work.

Denman said that her faith carries her forward. When facing overwhelming odds, she focuses on each person that can be helped through the shipment of medical supplies.

“Loving our neighbor is not just about our neighbor next door,” she said. “We have a Biblical imperative to help people wherever they are suffering.”

Denman is driven by Scripture, pointing to James, “Faith without deeds is dead.”

The Arlene Campbell Humanitarian Foundation offers a way for others to show their support for Ukraine – and put faith into action. Denman asks for prayers and financial support to make possible the procurement and deliveries of medical supplies – and to help the doctors who are continuing to serve their fellow citizens.