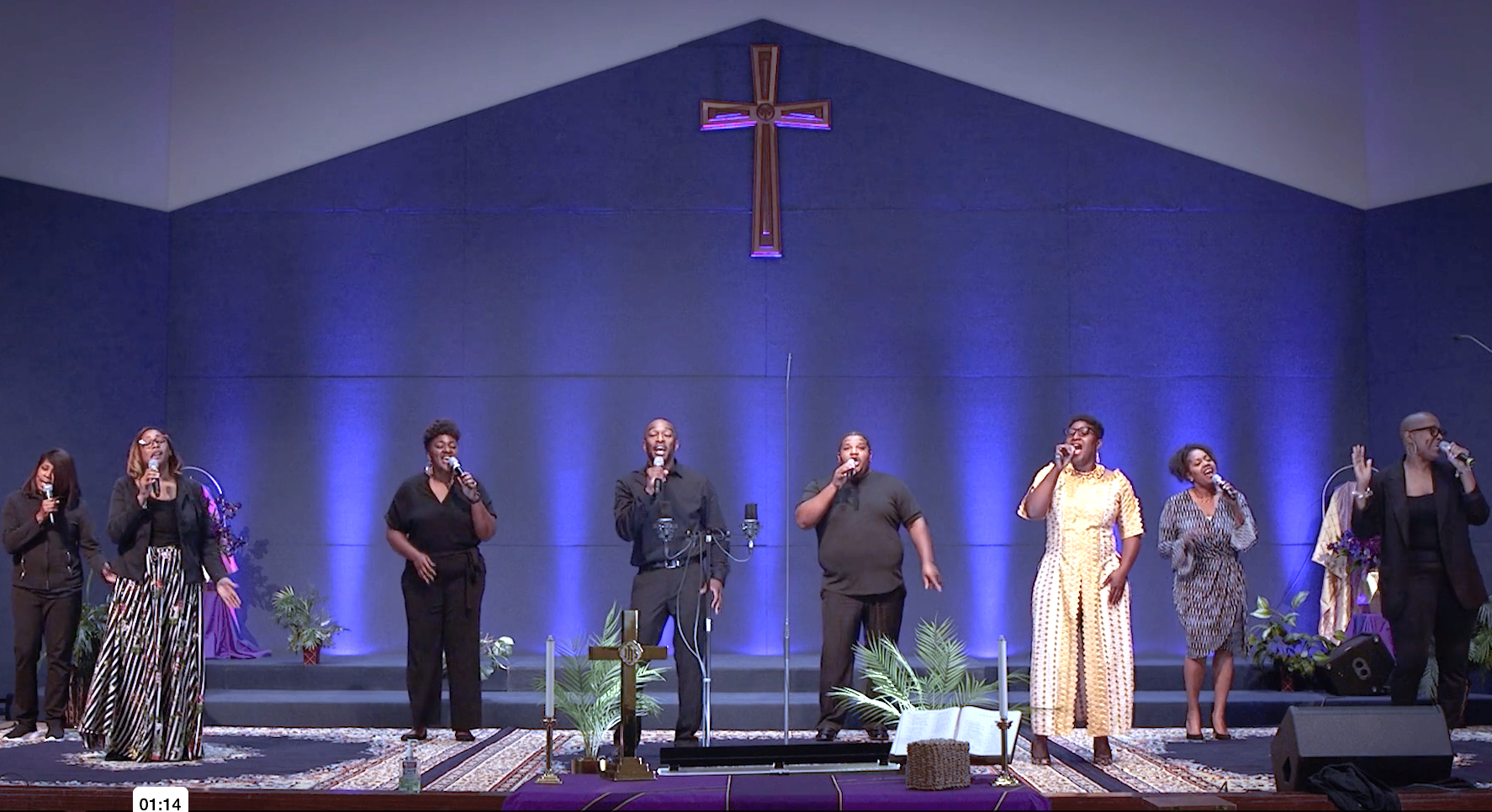 The virtual celebration of Martin Luther King Jr. Day at Houston Methodist Hospital opened with the Phillip Hall Singers from Jones Memorial UMC. Stretched across the stage, they performed “Woke Up This Morning with my Mind Stayed on Freedom,” belting out a refrain of “Hallelujah.”

Dr. Marc Boom, Houston Methodist president and CEO, welcomed viewers to the third annual system-wide celebration. He explained that for the past two years, the event was virtual because of COVID.

This year, a hybrid holiday celebration was possible. A video was live-streamed at each Methodist Hospital location.

“It’s fitting that we honor the life of Dr. Martin Luther King at Houston Methodist, as he was the true personification of our ‘I CARE values’ – integrity, compassion, accountability, respect and excellence,” Boom said.

Houston Methodist is a faith-based institution, operated in close affiliation with the Texas Annual Conference. Boom said that honoring Dr. Martin Luther King Jr. allows us to pass on the reverend’s vision of love, equality and tolerance.

“More than 50 years after his passing, it’s important that we keep spreading the message so that future generations remember the struggles that have gotten us to this point and the words by Dr. King that will continue to guide and inspire us in our quest for true equality,” Boom said.

Boom quoted King, “Life’s most urgent question is: ‘What are you doing for others?’” In that spirit, Boom explained that Houston Methodist hosted a week-long book drive at all of the hospital locations.

DesRoches recalled learning about Rev. Martin Luther King Jr. while in elementary school. He said, “What stuck out to me was his courage, the fact that he was never afraid. He persevered.”

Dowdell said DesRoches inspires us all, as the first Black president of Rice University.

Dowdell explained that celebrating the Rev. Martin Luther King Jr. at the hospital reflects the institution’s commitment to diversity and inclusion. “We care for everybody, each individual,” she added.

He joined the MLK Day committee about eight years ago. At the time, he said, there were six people in the group. Now, the committee size has more than doubled, and the holiday is celebrated system wide.

He explained that Spiritual Care partners with Diversity, Equity and Inclusion for the event, as well as the Center for Performing Arts Medicine.

As soon as the celebration concludes, planning for the next one begins, Estinphil added.

Seeing the celebration expand over the years has been rewarding, he said.

“Dr. King was a pioneer in so many ways,” Estinphil said. “The ideas he was promoting resonated with me as a young minister growing up.”

Before Houston Methodist began hosting its system-wide celebration, Rev. Lataya Simpson started a prayer breakfast on MLK Day at the hospital’s Clear Lake location, where she served as a chaplain.

For the occasion, one of King’s speeches was broadcast in the lobby for all to hear, and breakfast was served to both staff and patients.

The event was well-attended, Simpson recalled. Now Associate Pastor at Bellaire UMC in Houston, she said, “We had a packed house. Everyone loved it.”

“Scripture tells us clearly what God requires of us – to do justice, to love mercy and to walk with humility, and not only to talk, but take action,” Estinphil said. “That’s the significance of the MLK Day celebration. It reminds us of what we had to do not only as a nation, but as churches too. It’s something we have to keep in the forefront of our minds.”

Inequality is still present across the country, the chaplain explained. He said, “Dr. King’s ideals are yet to become concrete. Yes, we have come a long way, but we have a mighty long way to go.”

Chaplain Collin Powell, who was ordained in the Texas Annual Conference in 2020, looks forward to the Martin Luther King Jr. celebration at Houston Methodist each year.

“It’s never fully retrospective,” he said. “It’s always about what’s happening now, plans for the future and what continues to be done.”

Powell continues to be touched by King’s message of hope and justice. He also finds a parallel with John Wesley, who was a staunch abolitionist. The United Methodist Church has a long history – and continues today – to push for social justice.

“There is no holiness in a vacuum,” Powell said. “Holiness has to be lived out and acted on. That’s a strong Wesleyan tradition.”

The chaplain also pointed to a quote from Dr. King’s “Letter from a Birmingham Jail,” which reminds him of the Methodist connectional system: “We are caught in an inescapable network of mutuality, tied in a single garment of destiny. Whatever affects one directly affects all indirectly.” “It’s a timeless message,” Powell said.